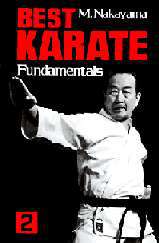 Kihon: Traditional Shotokan Karate aims for the perfection of technique and efficiency in execution of those techniques. Kihon involves the practice of single or multiple techniques with attention to detail, repetition, and plenty of spirit!
Kata: Is a Japanese word that means shape, form, or style. There are 26 Kata in Shotokan, with varying degrees of difficulty. Each Kata follows a defined performance line and comprises a set of defensive and offensive movements that are practiced as a solo exercise. Often called the heart of karate, they require much spirit when performed and contain effective self-defense techniques.
Kumite: Practice in sparring is conducted in several different ways, single step, multi step, semi-free and free style. Each requires timing, speed and distance. The most basic method is 5-step where practitioners are paired, with one executing the same offensive technique for 5-steps forward and the other executing an appropriate defensive technique stepping backwards. Each is instructed in the technique to be delivered and the instructor will count out each step. The most advanced free style Kumite has few rules other than little or no contact being permitted. Spirit is an important asset in Kumite.

We are also associated with Karate Alberta.  Karate Alberta holds regular competitions within Alberta and forms a team to compete at Canadian Karate Championships.